“It’s straight,” Bryan professed, his hand reaching to cover hers on the knot at his collar.
“It’s not. You want to look perfect this morning.” Leslie’s flawlessly filed French tips played with the silk of his tie, adjusting it with small tugs. Bryan looked at their reflections in the
six-foot horizontal mirror. Her flame red dress snug against her curves, she stood back to the mirror adjusting his tie. Sun pouring through the skylight nearly obscured her in its white glow.
“I’ll be late.” He planted an obligatory goodbye kiss at her cheek and headed for his briefcase at the door. “See you tonight.” He entered the hall pausing a moment for his eyes to adjust to the dimmer light. Raising his wrist, he glanced at his watch. Eight thirty. He had just enough time to hop in the limo and make it to Le Rousseau by nine; they’d be serving cheeses, fruit and café au lait, no doubt.
His stomach growled as he headed for the lobby.
A black Lincoln sat in the crescent of the wide drive. He thought it odd to have such an American monstrosity do the ferrying of executives through the outskirts of Lyon, into the countryside and the world-renowned vineyards. Nine a.m. meet and greet, ten o’clock walk through. He looked forward to seeing first hand the ancient blended into modern techniques of the French.
Four years since he’d taken the reins and this was the first time he’d made it to France. He slid onto the slick leather of the rear bench seat, nodding good morning to Judy.
“They’ll be expecting us to be ignorant.” Judy looked up from the glossy professional brochures in her lap. “The arrogance oozes from every perfect cuneiform curl.” She raised an olive green tri-fold printed on top grade paper. Misty vine-covered hills punctuated with the white of a French chateau was the backdrop to the elegant calligraphy spelling out La Rousseau.
“Ours are much classier.” Bryan observed.
“Yeah, and Bob’s your uncle.”
“We don’t need the pretense. Australian wines have been winning as many international ribbons as any—”
“Still there’s the perception.” She peered over her reading glasses. “And perception is everything.”
Bryan made a low growl at the back of his throat. “We’ll see.” He turned his face to look out the window. Sparsely scattered estates fell away and the countryside turned into open land, wild
grasses rolling along the fields rippling in the breeze that raced across them.
A heavy stone fence appeared, dividing road from fields now set in the neat geometry of the vineyard.

Turning through massive wrought iron gates, the limo glided up the road toward a
gentle rise on which stood the La Rousseau Chateau. Every bit as impressive as its likeness in the brochure, the gray granite blocks of its walls spelled money, power and prestige.
A black tuxedoed doorman opened the rear of the limo, his other arm held toward the horizon in welcome. “Mr. Lassiter and Ms…uh…”
“McBride. Judy McBride.”
“Very good. Ms. McBride. Welcome to La Rousseau Vineyards.” He divided a glance between them. “Please, follow me.”
They walked through a glass doorway open to the morning air, the ceiling of the room they entered soaring two stories over their heads. There was a heavy mahogany round table in the
center of plush inlaid carpet, its bear-claw feet curled as though ready to pounce from its position of prominence. An enormous spray of flowers set in a silver cloisonné vase seemed the only thing weighting table to floor.
Across the room a hearth, big enough to roast a pig, gave testament to the age of the building, intricately carved marble about  its mantel reflecting the baroque elegance of a much
earlier Louis.
“Judy.” Louis Rousseau’s voice boomed through the vast space, bouncing off the plaster. Period tapestries along the walls absorbed extraneous noise; no doubt the room was a banquet hall before the revolution. “And zeh junior Mr. Lassiter. So very nice to meet you.” Louis extended a fine boned hand. Slight of build, but immaculately dressed, Mr. Rousseau appeared much less intimidating than the oil on canvas likeness that graced the home page of the Le Rousseau website.
“A pleasure.” Bryan took his hand. Shaken with unexpected strength, he noted the physical signature of a man in control.
“S’il vous plait. Accompany me to zeh jardin. It ez much more beautiful on such a glorious day.”
Bryan nodded in a slight bow of concession and they followed Louis through the hall, out onto a grand terraced patio, which overlooked a sea of grass so green, it looked like it belonged on a football pitch. Islands of roses spread out in horticultural perfection on each side. Images of Versailles popped into Bryan’s head; this was on a smaller scale, but every bit as impressive.
“You are among the first of our guests to arrive. Please help yourself to refreshment.” He
raised an invitational hand to the linen-covered table abutting a semi circle of granite benches spanning half the perimeter of the house.
“Thank you,” Judy chimed in. “We’ll be fine.”
“Very good. If you will excuse me, I must greet the other arrivals.” Rousseau bowed and walked back into the house.
“Some spread.” Judy scrolled the surroundings and reached for a croissant from a cut crystal platter.
“Do you mean the grounds or the food?” Bryan asked in amusement. Judy seldom displayed any form of awe, even so much as using a relaxed colloquial. “Spread?” He chuckled.
“I’d just as well get used to throwing in an Americanism or two. Heaven knows we’ll be seeing enough bloody Californians over the next few days to fill Mr. Rousseau’s grand hall.”
“Hmmm,” Bryan acknowledged, scooping a flute of champagne from a silver tray at the far end of the table. He walked out onto the grass and took a gulp; the carbonation caught in his
throat on the way down. He swallowed and coughed, clearing the tickle. Delicious.

The champagne warmed his empty stomach with a pleasant fizz. The effect of its alcohol was felt
almost immediately in a rush of lightheadedness. He took another gulp, feeling the uncouth wine novice, but he didn’t care. First it was a morning of Leslie’s incessant nitpicking and now Judy
throwing the inevitability of Californians in his face. He needed a drink.
Every time he thought he’d gotten over her, there was a reminder. From the specter of some woman on the beach in a string bikini the shade of the one she’d worn one day at Malibu, to a
Yank accent on the breeze as he walked through Federation Square, to the never ending flow of Californians in the bloody wine business. Today would be no exception. All the world’s top
winemakers would attend La Rousseau’s CEO invitational, California being amongst the lot. Held every five years, Louis Rousseau made sure each attendee felt the tradition and pressure of
the French nipping at the heels of vintners worldwide. France held a place of historical esteem, even though superb wines were produced in many other regions of the globe. Rousseau knew it,
and pulled out all the stops to impress upon the vintner elite that France was not about to abdicate its place in the world’s eyes.
Bryan strolled out onto the grass and looked across the distant vines impassively. When would Carrie’s face leave him? There wasn’t a day that he didn’t think about her and wonder if
she was happy. One curt reply to a barrage of e-mails had been the only word he’d gotten from
her after that evening he’d called. She’d been swept her off her feet, she’d claimed, by this
American Brian. He’d tried to get through to her, writing e-mail after e-mail pleading his case, to
be met with a silence of two months and then that terse response.
“Don’t write to me any more, Bryan. I’m sorry, but I’ve moved on. I never expected to find an older man, but you were right.”

That’s what really stuck in his craw, that reference to his age. It had never made a difference to him so why all of a sudden did it seem to loom large in her mind?
He drained the glass and walked over for another. Snagging a wedge of Brie, he popped it in his mouth followed by a couple of red grapes. A croissant to sop up the alcohol, he bit the end of
the flaky crescent before sipping at another flute of champagne.
Slow down, Lassiter. You are going to need your faculties for this lot. He walked back out onto the grass and over to an island of pale pink roses bushes. Leaning to breath in the fragrance, he let his mind wander to Leslie.
He shook his head. Perhaps she had been a rebound at first. Carrie would certainly think so. Her looks had worn him down at first, yes. But she was bright and funny most days, unless
something or someone got in her way. Ambitious to the end, Leslie Covington was the epitome of a status seeker. He’d even accused her of coming on to him because of his place in the wine
world during one of their ever more frequent squabbles. Hell, recently they had been out and out fights, always ending in mind-numbing make up sex. The woman could have been a courtesan
with that voluptuous figure of hers. Almost a caricature, the hourglass of her form turned men’s heads wherever they went.
Yes, it had been a factor in her pursuit those first few months after the break up with Carrie. She’d kept after him with her brilliant idea of joining forces: Bradley LLC becoming chief
publisher and distributor of Lassiter Vineyards’ series of ‘Culinary Oz’, Lassiter wines prominently featured not only as part of the recipes, but as accompaniment to the complete meals
outlined and beautifully photographed against the background of the Mornington Peninsula’s spectacular hills and beaches. The books continued to be an international hit, selling prominently
in gourmet shops and chain bookstores alike.
He smiled at the memory of her obvious flirtation. Showing up at his Melbourne offices at least twice a week in those form-fitting dresses of hers, she always had another suggestion to
convince him of the affability of the two companies and this ‘win-win’ venture.
She’d finally gotten to him one night when he’d had a particularly hard week of missing Carrie and feeling generally sorry for himself.
“You’re such a man.” He could practically hear Carrie’s reprimand. Of course, she had said it in fun when she caught him checking her out on what he thought to be the sly, as she washed
dishes in that cute little kitchen of hers on the ranch, wearing nothing but short shorts and a tee.
He winced, a bit of truth ringing through his head. Yes, Leslie was beautiful, but she was smart as well as a good strategic planner as far as Bradley was concerned. She knew next to nothing about the wine business though and her lack of interest in learning had been the accelerant for more than a few rows.
“Bryan?” Judy’s voice pulled him from his thoughts. “The Rossi’s are here.” He turned to see half a dozen of the famous California-based vintners walking toward him like the original
Mercury astronauts, strutting the ‘right stuff’ in their expensive suits and, in the case of Mrs.Rossi senior, couture.
Forcing a smile to his face, he walked toward them in greeting to begin the day.

When We Were Amazing by Christine London 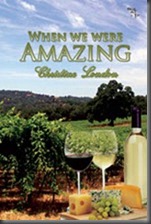