Ann Tracy Marr writes tales of the paranormal set in Regency Time. Let’s see what she has on her mind today. ALpha males or Beta. Which draw you?

“Christine London and I are doing a blog tour. That means that this week she can be found at Skyla Dawn Cameron’s blog and I am here. Read what I have to offer and then skip over to http://www.skyladawncameron.com/blog to visit Christine.

Like a good teacher, who never leaves the substitute hanging, Christine left me an assignment. She wants me to tell you what I knew as a teen that she did not. I could be glib and write about when I dreamt up the plot of the greatest novel ever written or how I discovered I was smarter than Shakespeare with a pen in my hand. I could take you on a tour of character building a la a girl who was not the most popular, the most pretty, or the most anything.

The topic that sticks in my mind is that of child abuse.

No, I am not claiming to be an abused child. My friend was. She would never admit it, but her father was a monster. Most people would say he was dynamic — he might even have been the pattern to cut out a damn your eyes romantic hero. He had the qualities of the Alpha hero:

Arrogant: he was always right.
Successful: he was pretty near the top of his profession, with the money to prove it.
Powerful: he was God in his house and probably in his office.
Handsome: I suppose he was okay, though I wasn’t into fathers.

Nasty. Oh, he could be nasty. Slap his daughter in the mouth so she has to go to the emergency room nasty. Dig at his son’s self-worth because the son didn’t have his drive nasty. Grind his wife under his heel if she wasn’t perfectly coifed nasty.

It is his fault that I am suspicious of Alpha heroes. They sound so good on paper, but I have a niggling suspicion that deep down they act like my friend’s father and I am just not interested. I’d rather write a hero with human failings and with a bit of humor. Oh yes, especially if said hero can poke a bit of fun at himself. My first hero, Lord Brinston of Round Table Magician, oh-so-politely insulates himself from life. It takes Martha to drag him, kicking and screaming, into the light.

Adrian Hughes, who knows very well that he is more standup comedian than haughty aristocrat, becomes the hero of Thwarting Magic. Margaret, who is forced to marry Adrian’s friend, recognizes his sterling qualities and has the sense to keep Adrian available until she is available.

Then we come to Lord Shelton. He is so busy trying to act like the alpha hero that he doesn’t notice that it isn’t in his blood. Katherine makes him see that it is more fun to pet kittens than kick them. That is partly why I am partial to To His Mistress; I think I present the good and bad sides of the alpha hero in the book while keeping the story exciting. Awe-Struck Publishing must agree with me — To His Mistress makes its debut in paperback October 25, 2011.

I will continue to write heroes who don’t quite make it to Alpha male. Beta is good enough for Sir Sloane Johnstone (Keeper of the Grail), who doesn’t shirk responsibility, even when responsibility gets buried under emergencies and problems. He could be Alpha if he tried, but Sarah Frampton likes him fine as he is.

Gentle reader, I hope you and Christine London don’t share my experience of the Alpha male, but don’t feel sorry for me. I happen to like Beta males. They are more interesting — less predictable — than Alphas.”

~~~
Ann Tracy Marr writes award-winning paranormal Regency romances. To His Mistress, the third book in her Banshee Brigade series, debuts in paperback October 25. Keeper of the Grail is in the works. A computer consultant in the Midwest, Marr lives with her husband, two cats, and plots that bounce off the wall. 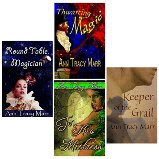