The Descendants– The Little Film That Could

Ostensibly about a man wrangling with the weight of decision – to sell a piece of pristine Kauai paradise passed down through generations of family– to land developers or to keep it in its natural state. What might have seemed oppressive pressure to choose wisely is dwarfed in significance when real life intrudes on just another day in paradise. Matt King’s (Clooney) consuming career as land baron takes backstage when his wife is involved in a boating accident. The daughters he has neglected in favor of work are suddenly thrust before him. How does a man with all good intentions of rekindling his neglected marriage and fragmented relationship with his children cope when fate shoves him into the role of parent? 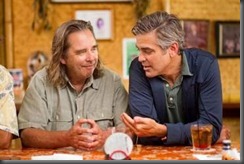 As Matt’s raw soliloquy at the film’s beginning reminds us, no matter the glorious setting, it can not dull the pain and challenges we all face. Set against Hawaiian backdrop of azure seas and tropical flowers, The Descendants reminds us what it means to be human in all it’s messy, ornamented layers.

George Clooney is yanked through the most intense and horrible of family shattering occurrences, but remains intact while fighting the Neanderthal knee jerk reaction most men would have when faced with their wife’s infidelity, mortality and children he barely knows. The film avoids the easy Pollyannaish path in favor of brutal reality while maintaining a delicate balance of humor and bittersweet ironies. Clooney is thus cast as a reluctant hero, but hero nonetheless.

Every character, from the rebellious daughters, to the flinty grief stricken father-in-law, to the eldest daughter’s smart mouthed boyfriend, to the object of Matt’s wife’s adultery – all are complex, multi-layered and oh so human.

Clooney’s character sees though these layers and interwoven lives to the core of grief and change allowing the viewer to come to the same conclusions he does by film’s end. How refreshing to be treated to such an intelligent plot and multifaceted characters. Highest recommendation and kudos.

*Congratulations to this quiet little film for its Golden Globe wins over other big glitzy contenders.*

5 Responses to The Descendants– The Little Film That Could